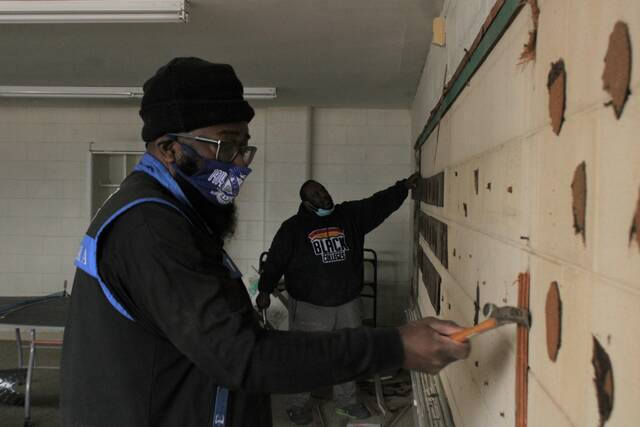 Martin Luther King Jr. Day is the only federal holiday designated as a national day of service. Volunteers helped build Habitat for Humanity in Hamlet and worked on the ongoing renovation of the James C. & Ruth P. Watkins Cultural Center. Michael McRae, chair of the Unity Day of Service Parade and Day, said that with all of the other MLK weekend events typically hosted by the Foundation going virtual, he wanted to make sure they did at least a thing in person and hopefully be a foundation for an annual facet of the MLK Day celebration.

The parade is an event that cannot be converted into a Zoom call, and has therefore been on hiatus for two years.

“With all of our Martin Luther King festivities, we want to bring new energy to the committee and to the community at large,” McRae said. “This new event coupled with the historical events we have organized in the past, we will make them last and make them stronger.”

Many of the volunteers who cleaned the Cultural Center were either alumni or from the Center’s youth programs when they were children. Hamlet councilor Maurice Stuart was one of the latter, although he said the center still had a profound impact on him in his youth and he only grew more respectful of his place in the community than as we age.

Volunteers started the day by cleaning up the Center’s future safe space and playroom for children and teens between sophomores and high school who are enrolled in the Leak Street Phoenix enrichment program. This area, a lower part at the rear of the building, had not been cleaned for many years. They also worked on repainting the Kids Cafe, among other projects.

“We want it to be a place where kids can go and do something positive,” said Bruce Stanback, volunteer director of the Center.

This cleanup began in November, and Stanback said they were about 30% complete this weekend. Stanback saw Service Day as a way to attract more volunteers and help accelerate the work they do.

Stuart was amazed when, as they were cleaning up in the future safe space, he saw a mural on the wall that he had never seen before despite having been at the Center for about 30 years. Painted by Stanley Gilbert, it shows college-age black men playing pool wearing memorabilia representing various historically black colleges and universities (HBCUs), a marker of the Center’s longstanding role in promoting higher education to young people from Richmond County.

“It’s a full circle for me just because all my life I’ve come to this Leak Street school, now a cultural center, and as always…has been a mainstay for minority students,” Stuart said. “Just being able to give back and honor MLK’s living legacy and do community service for this center, and on behalf of JC and Ruth Watkins who have tirelessly given to this community, is a loophole moment for me.”

Hazel Robinson, who was a teacher in Richmond County for more than 30 years and graduated from Leak Street in 1965, said the cleanup was badly needed for the community and had been a vision of elders for “some time. ”

“To see it come to fruition is a dream come true,” Robinson said. “We work hard to make sure the center … meets the needs of the community and there are so many needs in this community, not just with children but also with adults.”

The second group of volunteers working on the Habitat house spent the day planting grass seed, laying mulch and other yard work, and installing drywall. This project started in September and is nearing the final stages, after which the Habitat volunteer who has completed their 300 sweat equity hours can move in.

Commissioner Tavares Bostic said that while the parade is an important part of celebrating King’s life, he thinks King would want to see the volunteers doing what they did this weekend: service. Many of Saturday’s volunteers were fraternity brothers from Bostic to Omega Psi Phi who “answered the call” to be there. Members of Delta Sigma Theta and Alpha Pi Alpha were also present.

To support the Daily Journal, subscribe by calling 910-997-3111 or visiting https://www.yourdailyjournal.com/subscribe.