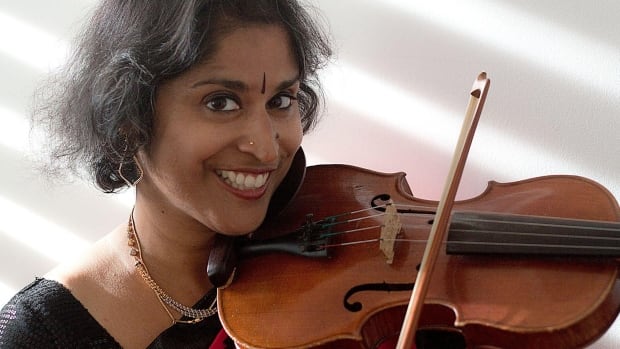 Through classic Indian art events online, our cultural community has strengthened its bonds

Anjana Srinivasan says she was in denial when the world shut down at the start of the pandemic.

“We thought, you know, a few weeks, a few months and be back in person,” said the family doctor and mother of two. “I don’t think anyone realized it would be for two years.”

Srinivasan is also an accomplished classical violinist from South India, who can’t wait for the curtain to go up this Sunday at the first in-person event her Montreal-area cultural association will hold since the first wave.

“It’s very exciting because we’re going to do group performances and that energy will be there,” Srinivasan said.

Last year’s virtual event featured group performances – courtesy of some neat editing by Srinivasan. She cut separate audio and video recordings together to make it seem like everyone was singing and performing together.

She has become an online recording enthusiast, turning part of her Town of Mount Royal home into a virtual concert hall and recording studio.

That’s what she had to do to keep the Indian community in the greater Montreal area connected to the arts when venues were closed and people were confined to their homes.

“I bought a mic, I kind of learn things by watching YouTube,” Srinivasan said.

Srinivasan has her own YouTube channel, where she has posted a series of videos, many in collaboration with other local artists and some in India, including her guru.

She shared several of these videos to mark holidays such as the Tamil New Year or the Hindu festival of Navaratri.

“I feel like I’ve come back to my roots,” she said.

Indian music and dance: part of who we are

Srinivasan’s upbringing is very similar to mine. We were both born in Montreal, our parents being from India.

None of us grew up watching Bollywood movies or performing Bollywood dances. As popular as the genre was, it was not part of our South Indian heritage.

We both had direct ties to the classical art forms of the region through our mothers, who are teachers in our community. This is how Srinivasan learned classical South Indian, or Carnatic, music, a centuries-old style, with a variety of scales or melodies known as ragas and beat or heaps.

My mother taught me the classical Indian dance style of Bharatanatyam, also an age-old tradition with rhythmic movements, hand gestures and facial expressions – telling stories through dance. Srinivasan also learned from my mother.

We both grew up playing in rented halls for local community events such as Deepavali, more commonly known as Diwali, and Pongal, the Tamil harvest season.

Srinivasan and I, along with other young people, would dress up in our Indian outfits or costumes to sing or dance. After that, the community would gather and enjoy a meal, often cooked by our aunts – us children all sitting together.

Our weekends were dedicated to music and dancing. When we weren’t playing, we were training (I would also teach later). We spent our summers taking family trips to India. Our time away from school was about our art, our roots.

Srinivasan studied Carnatic violin as a teenager from teachers in India and is still taking lessons from a renowned South Indian maestro. I am still learning dance with my mother.

But those moments of connection have far outstripped Zoom in the past two years. It’s ok for some kind of line dance class reunion, because I danced virtually with my sister, who now lives in Texas, and my other dance sisters, who moved to Ontario and Arizona.

For Srinivasan and myself, Indian music and dance are part of who we are, our outlet that keeps us connected – and sane – during the pandemic, amid our demanding careers.

That’s why I agreed to participate in an Indian line dance show that Srinivasan helped organize in March.

I practiced almost every morning before going to the office to anchor the late night news.

One Sunday, I returned to the dance studio where my mother used to teach before the pandemic. Dressed in my costume, jewelry and bells, I danced as Srinivasan and her husband set up the recording equipment. As soon as the music played through the speakers, I was overwhelmed with emotion. I fed off that energy and danced.

I felt the same way when my mom’s students finally came back to the studio for a rehearsal. My eyes filled with tears watching them in person, realizing what the pandemic had taken from us.

The virtual was “vital” for the young people of the community

Srinivasan didn’t hesitate to continue his classes when the first wave hit.

“I think it was vital. It was meant to be like this,” she said, adding that virtual community events keep students, including her teenage son, motivated.

“It’s hard to sit in your basement and practice just to practice.”

She felt the same way about line dancing lessons for her daughter, who is now learning the craft from my mom.

Srinivasan believes that teaching the youth of the community maintains their connection to the culture, much like our parents immersed us in music and dance growing up.

A direct connection with the “return home”

“Especially with my potatohe says, using the Tamil word for grandmother. “She was asking me to play something. So it’s definitely a direct way to connect at home.”

Born in India, Iyer moved here with his family as a child. He was seven years old when he first learned the violin. The 18-year-old Vanier College student remembers the first wave as such a confusing and isolating time, cut off from school and seeing friends.

Playing the violin from his home in Dorval, Quebec was his outlet. He says virtual concerts have made him less anxious.

“When you’re online, it’s sort of, you know, playing for your computer. So it was different, but I guess it was a little different,” Iyer said.

Still, Iyer is looking forward to performing on stage this weekend. Sunday’s in-person show will have limited seating as the community still wants to play it safe as local artists do their part to keep the music and dance alive.