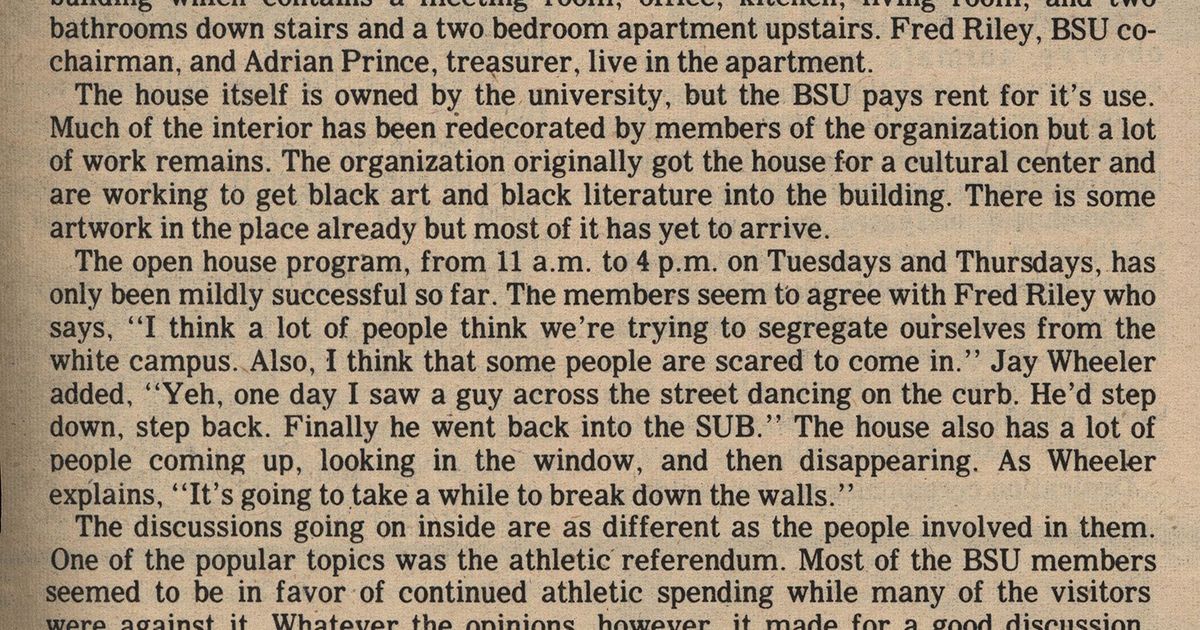 MOSCOW, Idaho — Nearly 50 years after the demolition of the College Master House — along with the Black Cultural Center, which stood there — the University of Idaho once again has a space dedicated to black students on the campus.

“We’re back,” UI diversity manager Yolanda Bisbee said at an open house for the university’s new black cultural center on Monday afternoon. “The Black African American Cultural Center is back. It was a slow process, but it finally came to fruition. »

Two years ago, the Black Student Union requested permanent housing as well as a director to help keep the union alive as members graduate. The new space is the first dedicated to the use of the group since the 1970s

The College Master House, which housed the Black Student Union Cultural Center after its establishment in 1971, was demolished when the building’s pipes burst in 1973. Instead of planning renovations, UI opted to demolish the house and others along Deakin Avenue, according to the university’s student newspaper, the Argonaut.

The Black Student Union had used the building as headquarters for meetings, activities, and offices. At the time, two members of the organization lived upstairs.

After a freezing winter closed the cultural center indefinitely, the Black Student Union found temporary accommodation a few months later at Canterbury House. The space took on the role of a gathering place for black students. However, in 1975 the organization received a letter stating that their new home would also be demolished, this time to expand the area known as People’s Park.

Since losing their original black cultural space, the Black Student Union has struggled to find a unifying home on campus.

“Because white colleges and universities were not designed for black people, UI was able to demolish our sovereign space without replacing it,” said Sydney Freeman Jr., full professor in the College of Education, Health and Human Sciences at UI. .

Freeman made history last year as the first African-American man to be promoted to full professorship at the state’s land-grant university.

He was also instrumental in setting up the new Black Cultural Center on campus, which is on the second floor of the Idaho Student Union Building in room 305. The area provides students with a way to socialize. and foster a sense of community. .

Mario Pile, director of UI’s new Black Cultural Center, previously served as project director for Veterans Upward Bound at Boise State University. At the open house, Pile said he was extremely honored to be part of the center.

“We hope that coming together in this way will make a difference on campus as students consider leaving, but see the space as a place to find refuge, peace and understanding,” he said. “The goal is that students – black students, in particular – don’t leave until they graduate.”

Today, black students make up about 1% of the university’s student population.

Narcisse Mubibya, president of the UI Black Student Union, says the organization gives black students a sense of community and spreads an understanding of black culture on a predominantly white campus.

The Black Student Union is currently celebrating over 50 years of membership at the university.

“I want to thank everyone for all the work they’ve done to make this available to us as black students here at university,” Mubibya said. “Making everyone’s voice heard is a big step. It’s something we deserve as black students — to be heard on our campus — because we belong here.

University of Idaho Associate Student President Kallyn Mai said it was amazing to see a space for black students returning to campus.

“There are a lot of different cultures, communities, and lived experiences, so having a place on campus where we know a specific subset of our community is going to feel welcome is amazing,” Mai said. “That’s what we work on every day.”

SW! NG OUT is coming to the South Miami-Dade Cultural Arts Center this week