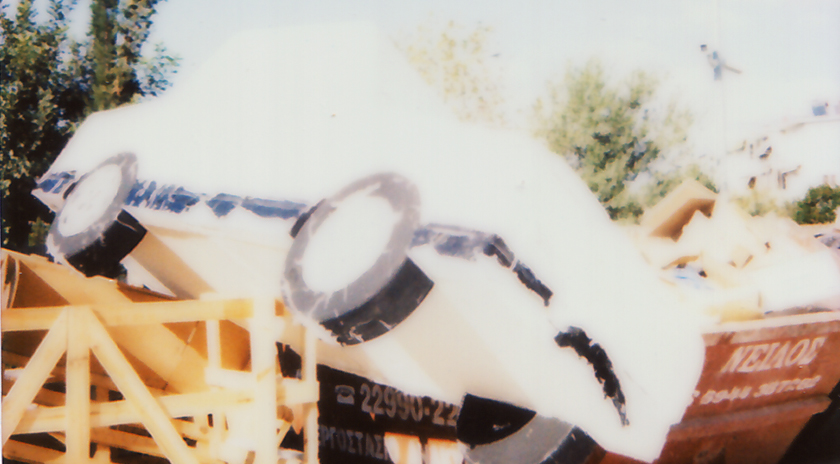 The exhibition of Christos Chrysopoulos at the “Melina” Cultural Center

The Autobiography of Christos Chrysopoulos is a diary, which consists of dozens of Polaroid photos taken over the past five years.

Adopting the medium of photography as an autobiography, the renowned author explores the relationship between the private and the public, a relationship which is known to determine the type of autobiography. Against this writing “both conventional and deceptive”, as Pierre Bourdieu describes it well, Chrysopoulos comes to offer an unconventional and fragmentary illustration of himself. His Autobiography is hypothetical, made of images without words, without his rule of Sartre (first) “to read” and (then) “to write”.

Chrysopoulos’ gaze is on orphan and solitary objects, such as a pillow thrown in the street or a cut tree trunk. Many of them are not easily recognized. Their form, identity and purpose are undefined. Their ephemeral dimension, combined with the often accidental encounter with them, seems to attract the author to immortalize them with his camera.

The street and the interiors have their place of honor here. The landscapes recorded by Chrysopoulos are not only Athenian. He is one of the writers who travel a lot – France, Switzerland and elsewhere – to give their opinion on his vision of Benjamin. Therefore, the concepts of travel and wandering also exist in these Polaroids. Chrysopoulos classifies its traveling gaze, leading us smoothly from the interior to the public space, and vice versa. A yellow tablecloth can be the bridge between a houseplant and yellowed, wilted palm leaves. Respectively, from the shiny surface of a marble statue, you are led to human flesh, to the naked body of Chrysopoulos himself, which is often inserted, reminding us that the life described here belongs to a specific subject. The fat body of the photographer is almost always presented folded, folded, like a living statue.

One could argue that the Autobiography contains all of Chrysopoulos’ previous photographic works. At the same time, those who know his literary work will have no difficulty in recognizing snapshots of his texts here. What is certain is that image and speech have an equivalent presence: his writing is influenced by photography, in the same way that the latter defines the context of his stories, revealing his interest in the passage and the flanking in the city.

In the exhibition space, all the measures necessary to respect the sanitary rules, but also the operating rules of the spaces, will be observed, according to the instructions of EODY and the National Committee for the Protection of Public Health.

The entry, according to the health protocols in force, is authorized to those who have:
Be vaccinated
Get sick (up to 6 months from diagnosis) and
· realized PCR negative within 72 hours or rapid antigen test within 48 hours, in case they have not been vaccinated.

The use of a medical mask is compulsory during the public’s stay in the exhibition space.

The start of the exhibition Will be held on Tuesday, October 12, 2021

Entrance to the public is free.