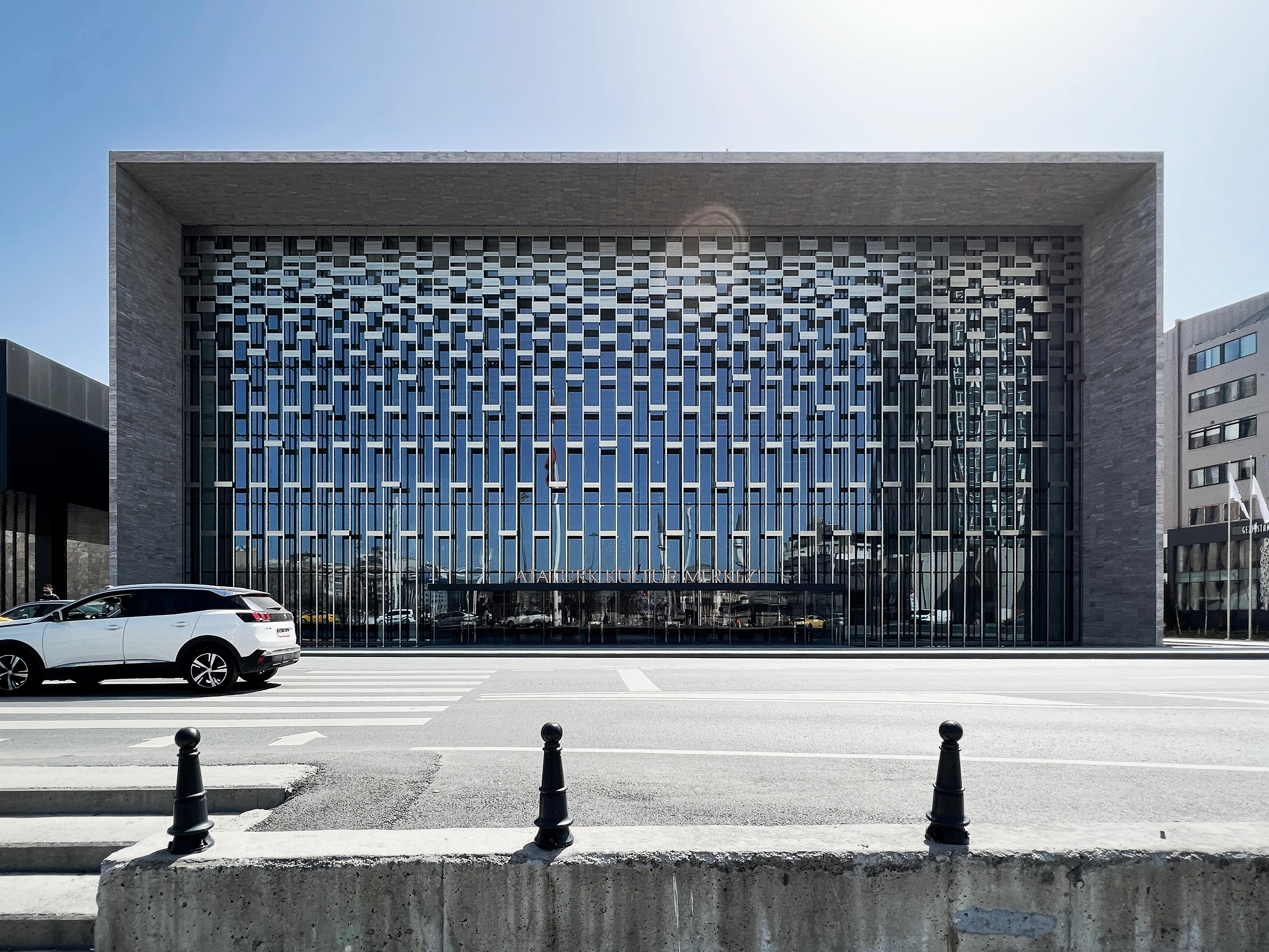 Recomposition as historic preservation at the Atatürk Cultural Center

In Istanbul, protesters recently clashed with Turkish riot police as they marched towards May Day protests and denounce the rise of inflation in the country. The intended destination was Taksim square, where dozens of union activists were gunned down on May 1, 1977, and which remains a contested public space. As one of the few large and relatively flat areas in the city, located at the crossroads of Istanbul’s metro lines, it’s no surprise that the square is a popular site for public gatherings. On a recent visit to the square in mid-April, there were no protests, just throngs of people frequenting this popular shopping and cultural destination.

Along the eastern edge of Taksim Square stands a building that has come to set a familiar backdrop for the space. The Ataturk Cultural Centeroriginally called Istanbul Culture Palace, has been anchored at the eastern end of Taksim since its opening in 1969. The building’s monumental glass facade serves as a visual terminus for street views of Tak-ı Zafer , reflecting the activities in the square as well as the city skyline.

Istanbul’s Atatürk Cultural Center represents a phoenix moment for a beloved work of architecture: a case in which a building was actually destroyed, not due to public disaffection, but to make way for reconstruction larger and more lasting.

For those who have not visited Taksim in recent years, it may seem that nothing has changed. However, today’s Atatürk Cultural Center is actually an entirely new building, the result of a razing and rebuilding effort that began in 2018 to replace the dilapidated 1969 structure. Reopened last fall, the center is a clever architectural update that resembles the old building while containing many new surprises.

Historic preservation consists of various approaches, but the Atatürk Cultural Center represents an unusual strategy. Architect Arata Isozaki describes two common preservation philosophies in the form of a comparison between Western and Eastern approaches. In Japan-ness in architecture (MIT Press, 2006), he opposes the preservation of the Parthenon (West) to that of the Grand Sanctuary of Ise (East). In the Parthenon, which stood in a semi-ruined state for centuries, historical value is associated with the material remains of the original structure. Alternatively, in the Grand Sanctuary, which is rebuilt every 20 years (alongside its architectural carbon copy), the historical value is associated with the form of the building in its rebuilt state. Regardless of culture, both of these examples of strategies—preserving a historical relic or reconstructing its replica—are standard preservation techniques. The building in Taksim Square, however, goes against both traditions.

The Atatürk Cultural Center finds its origins in the project of the French urban planner Henri Prost to present a Opera near Taksim Square in its 1930s plan. In 1946, construction was delayed to an initial design by architects Feridun Kip and Rüknettin Güney, and architect-engineer Hayati Tabanlıoğlu supervised the project from 1956. The first center, built in 1969 then reopened in 1978 after a fire consumed much of the structure in 1970, is credited to him. A simple box shape with clean lines and Bauhaus-inspired details, it was considered the first modernist building in Turkey. Although it has become an iconic feature of Taksim Square, the building fell into disrepair and was closed in 2008. The uncertain future of the center has become the subject of heated debates.

Murat Tabanlıoğlu, the son of the original architect, was hired to revitalize the project. Although the dilapidated state of the building led to the decision to demolish the original structure, the architect sought to retain many of its memorable aspects, such as its glass and aluminum facade, tiled surfaces and staircase interior spiral staircase suspended, during reconstruction. However, behind this veil of design continuity emerged a much more ambitious project. Rather than rebuilding a replica, the architect sought a “redial.”

The original building consisted of a large stage, a concert hall, several smaller performance halls, and exhibition space totaling 560,000 square feet. Although the new structure, which opened to the public in late 2021, appears to be the same size from the street, it is nearly double in size (over a million square feet) with the addition of a library. , a congress hall, a museum, an art gallery, restaurants and cafes. Tabanlıoğlu achieved this impressive feat by adding a vast north wing on an adjacent plot used for parking. The fact that neighboring buildings surround this space has allowed the new wing to emerge discreetly from the surrounding streets. In addition to being much larger, the new structure includes a few other changes, ranging from the subtle to the surprising. For example, the main glazed facade is framed within a stone clad enclosure that is deeper than the original building, providing improved shading and protection from the elements. Meanwhile, the lobby’s configuration represents a more abrupt change: the architect inserted a new auditorium encapsulated in a sphere covered in 15,000 red tiles, a bold design move that received a mixed reaction public.

Tabanlıoğlu’s recomposition of the Atatürk Cultural Center represents a compelling, if uncommon, approach to the preservation of architectural history. The design retains the iconic attributes of a culturally significant building while providing programmatic and technical updates that enhance its functionality and longevity. From an environmental point of view, it is generally preferable to use as much of an existing structure as possible; however, in some cases like this, sufficient deterioration presents a challenge to this strategy, prompting further construction.

Lamenting a common form of building obsolescence, architect Takaharu Tezuka argue“Most modern buildings are destroyed not by earthquakes, but by people’s aversion to them. When we talk about architecture, we emphasize the word affection, because it is essential for the longevity of buildings that they be loved.

Istanbul’s Atatürk Cultural Center represents a phoenix moment for a beloved work of architecture: a case in which a building was actually destroyed, not due to public disaffection, but to make way for reconstruction larger and more lasting.

The opinions and conclusions of this author are not necessarily those of ARCHITECT magazine or the American Institute of Architects.