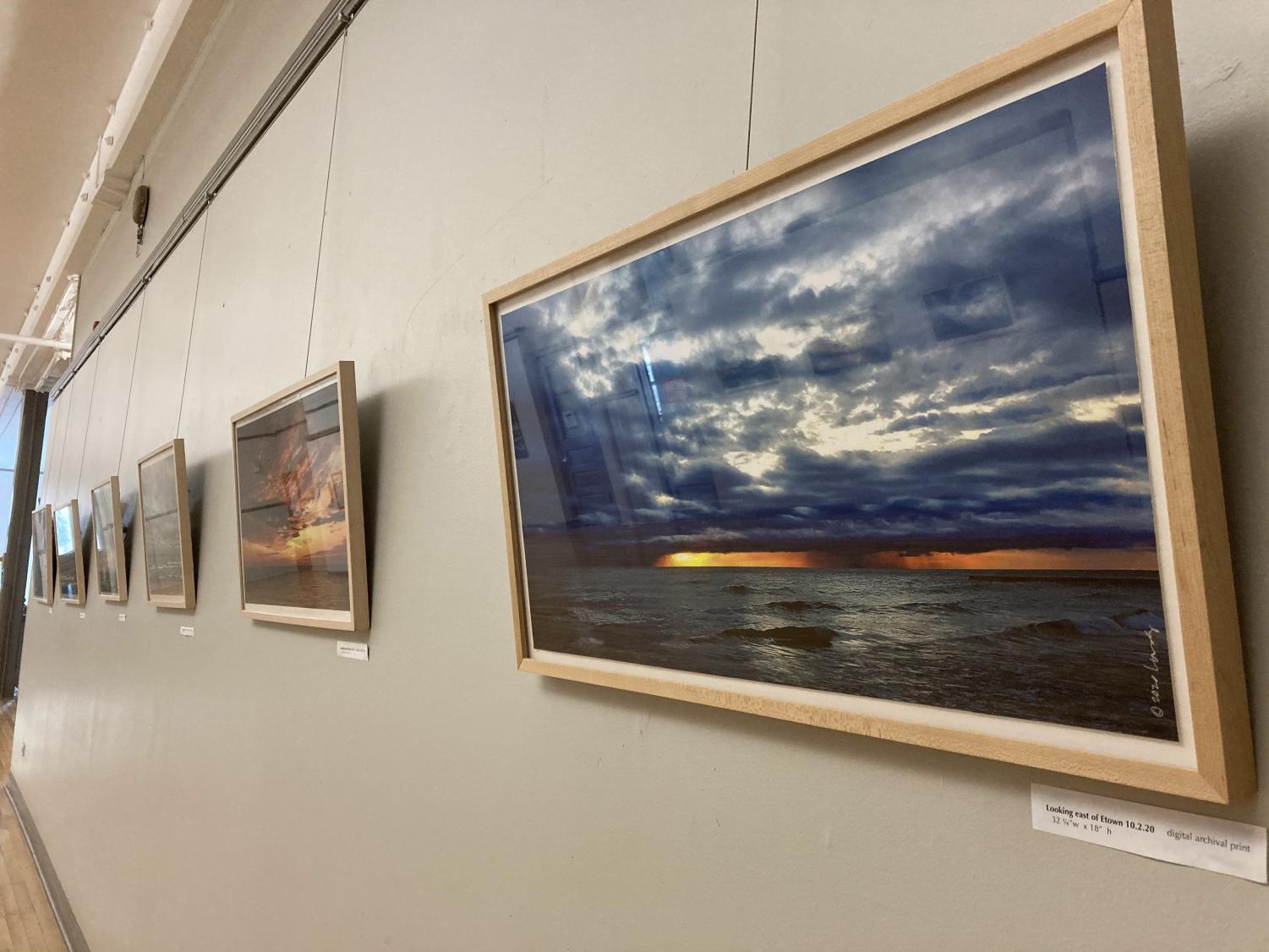 Local artist Larry Lundy, known professionally as LP Lundy, opened its “Wave After Wave” exhibit in the Noyes Cultural Arts Center’s second-floor gallery on May 20. Through July 17, the exhibition features some of his earlier works alongside lake photographs from his “Looking East of Etown” series. which he has been working on since 2012.

Lundy began art direction in high school, when he redesigned the format of his school’s literary magazine. He then edited for SUNY Buffalo State College Literary Magazine, where he changed the name from “Elm Leaves” to “LEEVZ”, pushing conventional boundaries.

After moving to Chicago in 1979, Lundy developed projects like the LOOP Show, which he said aimed to put Chicago-centric art on the map. In addition to a traditional artistic career, Lundy began working in art direction and set design for film and television in the 1980s.

Lundy will teach RTVF 379, a production design course at Northwestern, this fall. The Daily spoke to Lundy about his current exposure and his rich history as a creator.

This interview has been edited for brevity and clarity.

Le Quotidien: When and where did you start your artistic career?

Monday : When I was a kid I knew I could draw and I thought everyone could, so I was surprised I couldn’t. My brain has been on fire ever since.

The Daily: It seems you’ve drawn much of your inspiration from dismantling conventional rules, grammar, what constitutes “real” art and the like. How has this principle guided your career?

Monday : I’m the kind of person who says, “If I’m on my bike and there’s no one coming anyway, I’ll go.” I won’t wait for the light to change. I really feel like some people would say I’m pushy, but for me, I’m an advocate for myself. And I feel like that’s something I’d like to pass on to young people in particular.

Le Quotidien: You have worked as a decorator and art director for many popular media, including “Shameless”, “Batwoman” and “High Fidelity”. How did you get into this job?

Monday : I ended up getting a job at a company that painted sets for themed parties. (When I quit this job after being denied a raise) I had no idea my friend Julia would be calling me from the Encyclopedia Britannica production office saying, “We need a painted backdrop for our decor.” I ended up staying there for two weeks – and made a lot of money because they were paying $5 an hour on the books – but that was my foot in the door.

Later (in my career), I developed a philosophical modality. I imagined the work being done, whatever it was, someone patting me on the back, shaking my hand and saying, “That was awesome.” And then I come back (to) where I start, then I’m like, “How do I get this?” A lot of times we fight and say, “Oh my god, what am I going to do?” I have the impression that it is something that needs to be deprogrammed because we are too angry with ourselves.

The Daily: Tell me about your most recent exhibition. Where does the inspiration for “Wave after Wave” come from?

Monday : It’s a combined exhibition, because I’ve had a lot of work that no one has ever seen — or very few people. And people didn’t know I was doing anything other than taking pictures of the lake. I have a painting I did when I was 13 from 1967 that I painted from a postcard from Oslo, Norway. I have a drawing of my high school girlfriend from 1970. (There are) pieces in there that I realized were emotionally connected to me, and I didn’t realize it at the time. ‘era. There are drawings of my sons.

Le Quotidien: Which piece of the exhibition stands out?

Monday : The largest room in the show is 11 feet wide, called “Rough Crossings,” three panels. And basically it’s a combination of a drawing and a painting. Panels are muslin treated with acrylic medium yellow dye and marble dust. And then on top of that, I add a porcelain marker, a black grease pencil, then I break it down with a solvent and it becomes a paint. So it’s very, very moody, not ominous, but gloomy, and it’s about going through a difficult time in your life.

Le Quotidien: Are there any messages you would like to leave with viewers?

Monday : I have three rules that I used when I was teaching, and also when I was working: work smart, have fun, be crazy. And then the last one is now new, called “be a sponge”, because I want people to absorb stuff. And don’t accept everything, but absorb it and then evaluate.