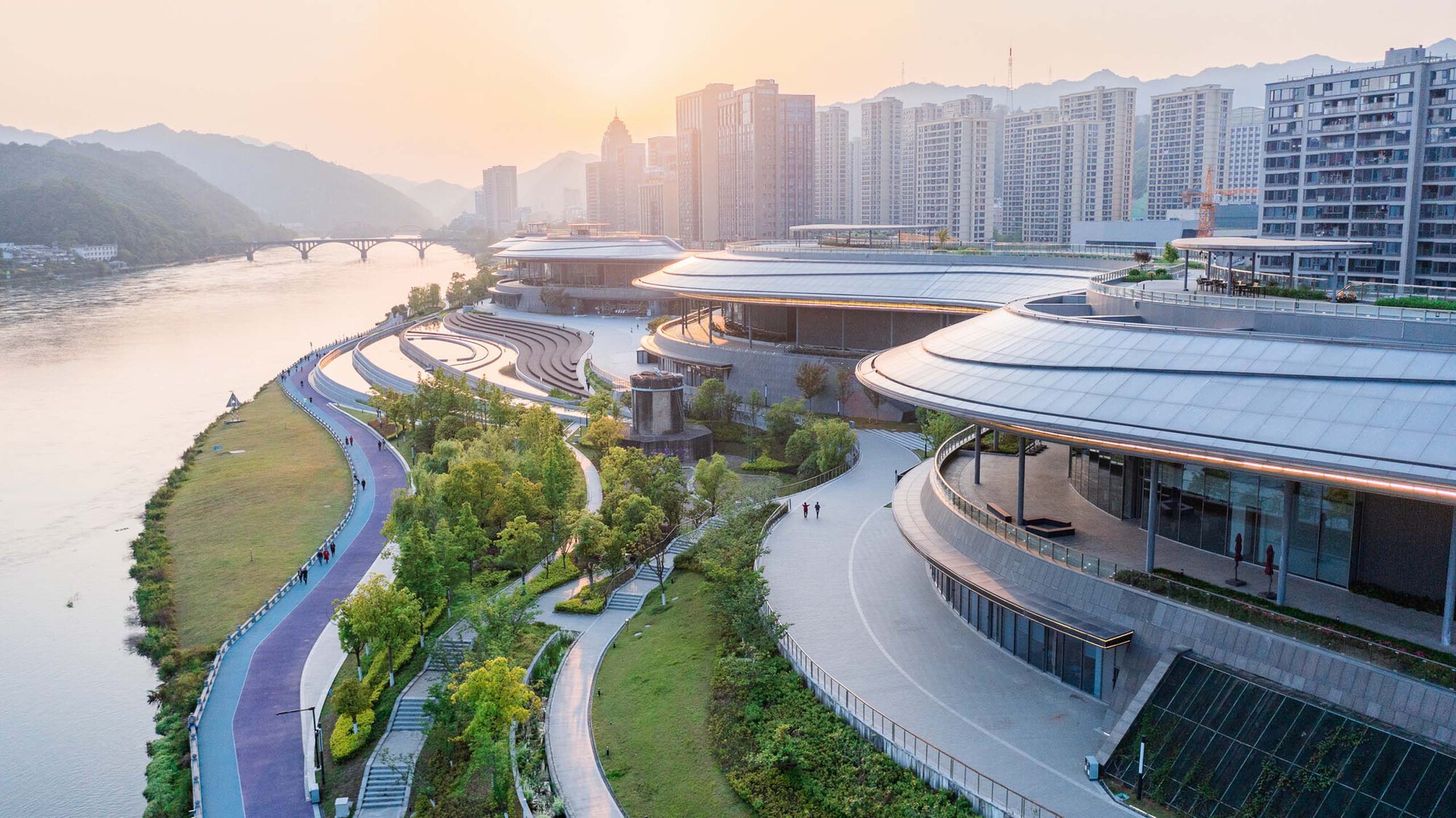 Site: the Merging Belt Between City and Nature. Jiande is a city-county in Zhejiang Province, in the southern part of the Yangtze River Delta region on the southeast coast of China. Most of Jiande is covered with hills and mountains, crossed by the Xin’an River. GOA’s Jiande Cultural Center is located in the heart of the city. It is a belt merging city and nature, nestled between the newly developed Qiandong Central Business District to the north and a stretch of rolling hills along the Xin’an River to the south. Along the shore, the site extends 600 m long from east to west and 60 to 140 m deep from north to south, facing a water surface 280 m wide. As a city-wide cultural complex, this project includes four locations: a public library, a museum and two activity centers that serve different groups of people. The entire project encompasses an area of ​​approximately 31,900㎡ above ground level. Within such a long and narrow site, the volumetric architecture becomes a significant figure in the riverside landscape at the end of the stretching urban axis. This curvilinear site presents both opportunities and design challenges. On the one hand, it maximizes the landscape interface at the water’s edge. On the other hand, it constrains the organization of the program of such a construction on the scale of the city. Under such a specific condition, generating a monolithic landmark image and satisfying the functional requirements while maintaining its spatial transparency and avoiding visual blockage becomes the starting point of the design.

Floating Quality: Liberation of the Ground Floor. The water of the Xin’an River comes from the 70-meter-deep bottom of its upstream reservoir; therefore, its temperature remains constant throughout the year at 12-17°C. As the seasons change, the temperature inversion between air and water causes a layer of fog to cover the surface of the river, blurring the boundary between city and nature. Fog is the design clue. “When we visited the site early in the design process, we were amazed to encounter nature in such a misty setting.” Inspired by the landscape, the architects adopted the floating and light quality of fog as the central image of the design to echo the design aesthetic of the misty landscape. A 600 m long architecture meanders along the river, echoing the outline of the mountains. The volume is divided into four cylindrical pavilions of varying sizes and connected by an undulating canopy roof at the top, presenting the geometry in minimal strokes and further emphasizing the formal dialogue between the building and the landscape.

As well as being a symbolic architectural gesture, the ribbon-shaped roof is a single-storey 4m high that houses the museum’s exhibition halls and offices. As it extends towards the river to the south, its height decreases, creating a cantilevered veranda canopy. The covered veranda on the 2nd floor is a continuous 10m wide platform for public activities as well as a space to coordinate the transition between the interior space and the exterior environment. Entrances are located on the 1st floor, while functional programs are raised on the 2nd and 3rd floors to free up floor space and allow ground circulation to engage with urban streets and the waterfront landscape belt. In addition to the entrances, the ground floor accommodates small commercial spaces. These fine installations at street level maintain a dynamic link between cultural and urban life. Additionally, the north interface echoes the urban context by dividing into smaller individual rooms to match the scales of the surrounding buildings.

Pavilion: the civic eaves. Taking a leisurely stroll along the river on summer nights and enjoying the cool, cool breeze is a popular activity for Jiande residents. The design includes, continues and further enriches the existing riverside activities in Jiande by creating a container for diverse dynamic life scenes rather than just being a pretty sculpture. The ribbon-like canopy roof is raised from the ground plane to provide open access to the public plaza and a panoramic view of the rolling hills across the Xin’an River, making the architecture an attractive for people who walk and stay. The awning roof inflates and retracts horizontally. When it inflates, the area below becomes a covered place; when it shrinks, it becomes an exterior plaza.

The spatial atmosphere contributes more to the spirit of a place than the architecture itself. The introduction of a 40m arched span creates a strong framing effect where the central place of the architecture meets the urban axis. This vast span becomes a spectacle that draws the attention of all inside and outside the building, establishing an instant connection between architecture and landscape. The structures are reduced to four 14m-high steel columns to maximize the visual relationship between the city and the natural environment, which draws people into the beautiful landscape of Jiande.

Visitor experience: an integrated 3D landscape. This multi-level cultural complex includes enough outdoor and semi-outdoor civic spaces to facilitate a wide range of landscape experiences. The integrated design of landscape and architecture establishes a circulation of observation of the landscape on several levels. The winding southern waterfront interface emerges in its dynamic, fluid form and blends with the surrounding landscape through terraced steps. The 3-tier waterfall visually extends the surface of the water towards the architecture, further blurring the boundary between water and landscape. Extending towards the river, the 2nd floor city-wide observation deck allows people to observe nature from a distance while resting or taking a walk. Different elevation levels interact with the undulating accessible roof to provide variable landscape perspectives with every step. Programs are organized around a central spindled atrium in each room. All the large functional spaces have a view of the river. For example, a landscape scroll is unrolled in the library’s reading room as a background reading companion.

Detail: the interface of the 6th façade. The architecture looks like a “ribbon” that accompanies people’s movements. The surface of the suspended ceiling, named “6th facade” by the architects, becomes the most important interface allowing people to interact with the architecture when they pass through it. Low reflectivity silver gray metallic aluminum panels are chosen for the suspended ceiling to reduce visual weight. An additional layer of edge sealing effect eliminates visual height from structural beams to minimize overhang thickness and conceals spotlight belts. A neutral gray material palette showcases a humble architectural figure in context. Stone base, glass and aluminum panels contrast light and heavy features. The various materials and interwoven textures allow each interface to generate a rhythmic play on the facade, imbuing it with vivid expressions.

Revisit the voice of the public. Since its grand opening, Jiande Cultural Center has been well received and appreciated by residents of all ages due to the quality of its inclusive public space and considerate landscape scale. It catalyzes the modern urban lifestyle, energizing the waterfront by providing opportunities for diverse activities. It is an important cultural landmark of this picturesque city because it creates a new dialogue between the city and the landscape in a soft and light posture, listening to the bustling city and the quiet nature.