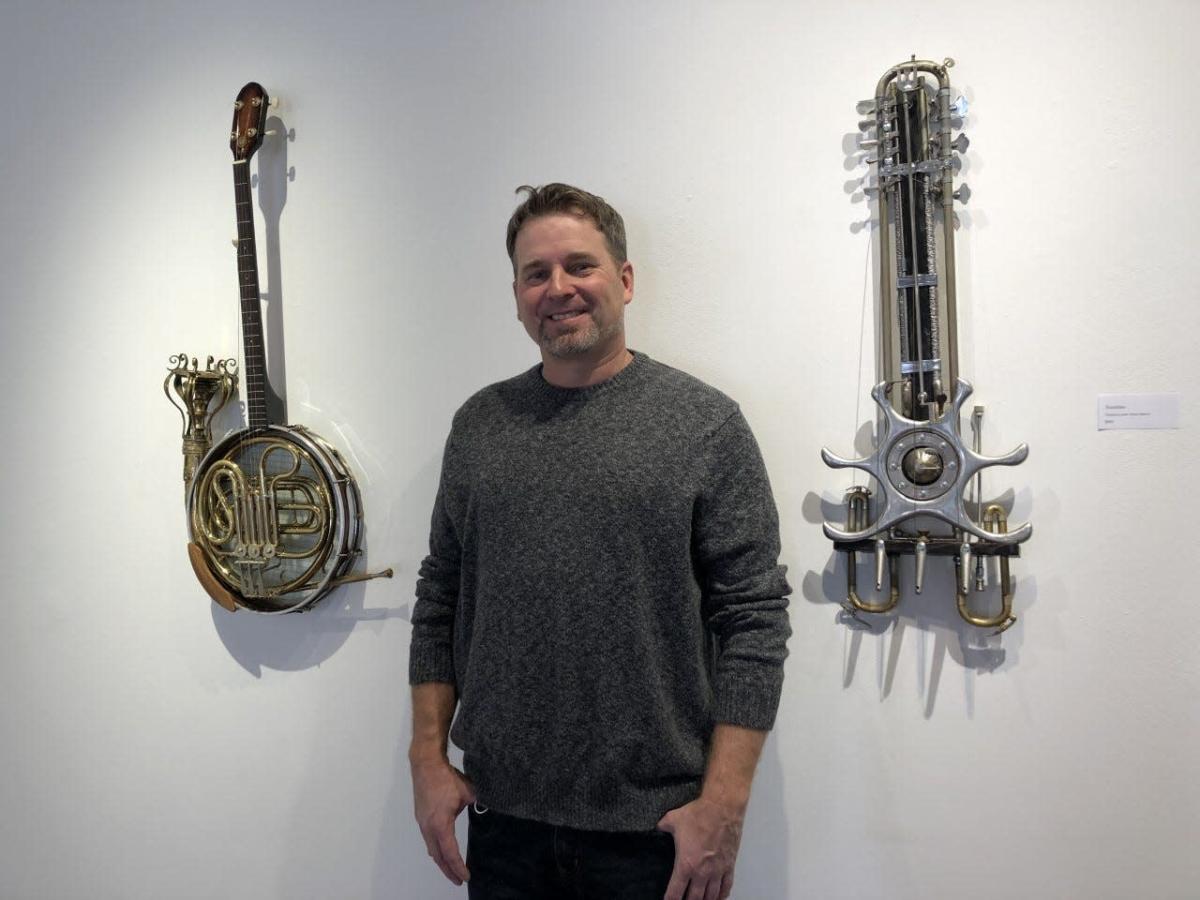 The wings and bells of a dozen trombones are stacked like cordwood in the â€œSeussaphoneâ€ wall sculpture.

Tarnished parts of old cornets, trombones and other instruments are built on an old Royal typewriter in “Royal Office Piano”.

Parts of a genuine 1965 Plymouth Barracuda work in tandem with those of a guitar to create “Slant 6-String Barracuda”.

And a Herbie Hancock record serves as the body for the “33 1/3 Strat-O-Caster” with platinum pieces serving as fingerboard and head.

These inventive and detailed deconstructed and reconstructed musical instruments are the work of Brian Riegel and are on display until December 31 in the â€œOut of Tunesâ€ Downtown exhibit at the Cultural Arts Center.

Visual variety: “There is no place like home”, a reflection of the myriad of artist styles

â€œI wanted to be a musician growing up,â€ said Riegel, 50. “I had friends in bands and I tried out with the trombone, the viola, but I usually ended up being the lyrics guy.”

Several years ago Riegel, who had taught art for 21 years at Worthington Kilbourne High School, began collecting old musical instruments and broken instrument pieces. He used them to conjure up new instruments which may or may not produce any sound and would certainly not be found in any band or orchestra.

These creations that look like a guitar or a fanfare are beautiful, curious, often humorous and always intriguing.

Riegel, who lives in Powell and works in his garage studio there, said he had a bunch of musical instrument parts he collected or that people gave him.

â€œNo one wants to just throw away a musical instrument, no matter how damaged it is,â€ he said.

Van Gogh: Exhibition “Through the eyes of Vincent” a celebration of the post-impressionist painter

His sculptures, he said, are meant to pay homage to the original instruments and those who played them as well as to reuse them.

â€œI always felt there was a kind of creative energy on the part of the people playing them,â€ Riegel said.

In addition to the mixed instruments, Riegel’s exhibition includes a new series of works that pay homage to the early days of hip-hop.

As a student at Ohio State University, Riegel worked as a DJ and while earning his Masters of Fine Arts from the University of St. Francis School of Creative Arts in Fort Wayne, Indiana, wrote a thesis focusing on street art.

The two come into play in an installation that runs through three walls of the main gallery of the Cultural Arts Center.

On more than a dozen works depicting New York City’s transit cars are street art photographs – graffiti and images that pay homage to musicians and cultural icons. Between them are wall installations: “Megablaster”, a huge boombox made from stereo components, and “TechRiegel Turntable”, a larger-than-life turntable that offers hologram projections of early deejays and rap artists such as as Grandmaster Caz.

These works, said Riegel, are meant to show how hip-hop is a place where “movement, sound, style and culture continue to push the boundaries, to experiment and to entertain.”

Which is a good way to describe what Riegel did with the art featured in this exhibit. “Out of Tunes” makes you want to put an old horn, guitar or vinyl turntable on the artist’s porch, just to see what he would do with it.

For people with disabilities, credit is the key to a crisis