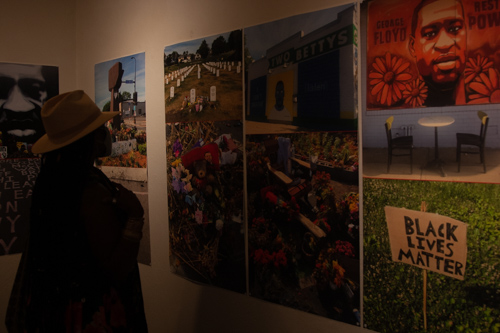 In a Laguna Beach first, Juneteenth arrives at the Cultural Arts Center

By Tasmin McGill, special for independents

The Laguna Beach Cultural Arts Center hosted the city’s first June 19 celebration on June 19. This date coincides with the arrival of federal troops in Galveston, Texas, on June 19, 1865, to free the last slaves two and a half years after the signing of the Emancipation Proclamation. .

During the five-hour event, free viewing of the 2022 Oscar-winning documentary “Summer of Soul (…or, when the revolution couldn’t be televised).” Guests enjoyed a barbecue and a performance by funk and soul artist O’Malley Jones and the band Stepping into Now.

For local resident Gary Stewart, “Summer of Soul” was a powerful documentary because of the contrast between the Apollo moon landing and the Harlem cultural festival that took place at the same time.

“Somebody was there to interview people at that gig to see their reaction to the moon landing. You can’t blame any of those people for saying, ‘Well, that money doesn’t mean anything.’ see there’s a need for that money to be spent on other things like poverty,” Stewart said. “They weren’t mean or mean, they were just honest. They didn’t see what it was all about. really connected and I thought that was a very powerful subtext to show how phenomenal this show was and how little attention it got nationally.

Local constitutional attorney Howard Hills shared his thoughts after watching “Summer of Soul” and how many people don’t realize how historic it is that the United States abolished slavery.

After the film, the smells of the catered barbecue spread throughout the room. Guests mingle in the three rooms with plates filled with the essential main and side dishes for a well-rounded Texas barbecue. During intermission and while enjoying their meal, guests walked through the halls to view the work of Tom Lamb and Allyson Allen.

“Tom was affiliated with the [BC Space] before becoming the Laguna Beach Cultural Arts Center,” said LBCAC founder Rick Conkey. “I got to know him over the years as one of the artists.”

Lamb was in Minneapolis to visit family a week after the murder of George Floyd. Taking out his camera, Lamb captured the protest art that adorned the streets of Minneapolis, while simultaneously explaining the seriousness of what was happening to his brother-in-law who lived there.

Following the removal of “Piece-ful Protest” from the local Wells Fargo branch in January, fans of Allen’s exhibit were thrilled to see pieces lining the LBCAC wall. Allen not only displayed his protest quilts for the event, but two were also available for purchase.

“She advised me and she also wrote a statement about the event and she was also willing to allow us to display her pigtails,” Conkey said.

Once at 6 p.m., Jones and the band Stepping into Now took the stage to get the crowd up and running, playing classics like James Brown’s “Get on Up,” Marvin Gaye’s “Let’s Get it On,” and “Love and Happiness.” “. by Al Green.

“I worked with O’Malley for many years. He is incredible. He’s not necessarily the best band manager ever, but I love him so much,” laughs Conkey. Due to a problem with the band, Conkey called and was able to find musicians for the performance on the day of the event.

“I know a lot of players. I was able to call some people and I got lucky. We have Rock Deadrick’s nephew, Brandon. He was amazing,” Conkey said. “And Geoff Glass, a Superior Court judge of all things. He’s a resident here, but he’s also played with O’Malley over the years, so he knows O’Malley very well.

“He played with O’Malley once before that when O’Malley didn’t have a band. I got his band to come out and support O’Malley because they appreciate who O’Malley is and what he brings,” Conkey said.

Between the fairly cramped seats, the crowd found room and made it their own personal dance floor for nearly two hours until the very end, when Conkey had to take Jones’ microphone to prevent an encore.

“We lost some money, which is good, it’s about raising awareness,” Conkey said. “We look forward to seeing it grow beyond the confines of the Cultural Center for the Arts. »