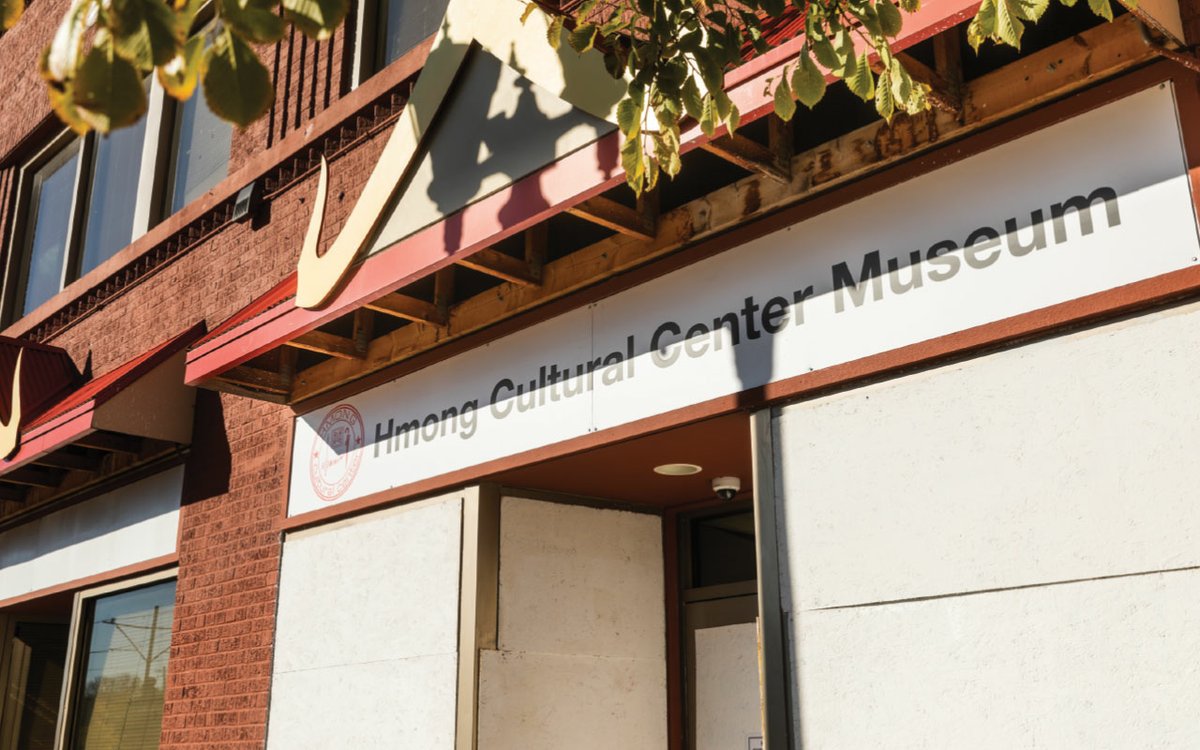 At 3:40 a.m. on September 8, the Hmong Cultural Center was vandalized by three white supremacists who were hiding their faces in baseball caps and neck warmers. Vandals sprayed thick white paint on the museum’s facade, covering anti-racist verses by local poet Tish Jones that were painted onto the window panels. They left a tag – “life, liberty, victory” – associated with the white nationalist hate group Patriot Front.

But on this hot Sunday just over a month later, with the vandalism long gone and a low sun saturating the 300 block of University Avenue in the St. Paul’s Frogtown neighborhood, you’d be hard-pressed to know that something unpleasant has happened here.

The street-level museum is an extension of what had just been a second-floor collection before the Hmong Cultural Center won an unsolicited Google grant of $ 50,000. Programs director Mark Pfeifer tells me that a senior public affairs official emailed him last spring after the wave of anti-Asian hate crimes said the company wanted to donate. Could the museum use $ 50,000 unconditionally? The answer was yes!

â€œIt was essential,â€ Pfeifer says as we tour the museum. â€œIt’s the museum’s general operating grant to cover things that other grants don’t.â€

The museum is dedicated to folk arts and Hmong history with an emphasis on education and not rare items. â€œWe’re not trying to be the Hmong Smithsonians,â€ laughs Pfeifer. The space has two dedicated alcoves for musical instruments: the free reed pipe, the jaw harp, the flute, the two-string violin and the qeej (pronounced as “keng”), a graceful crescent-shaped instrument made of bamboo pipes. And there are touch screens where visitors can watch videos of Hmong sung poetry and hear the melodic buzz of the qeej. On the walls are traditional embroidered fabrics and history canvases, which depict village life of the Hmong people in Laos in colorful hand-sewn narratives. These screens are complemented by information panels and a flat-screen TV for viewing documentaries.

The Hmong Cultural Center itself was founded in 1992 in the basement of a Hmong funeral home in Dale and Lafond. At the time, the center taught classes in traditional wedding and funeral songs and qeej. In 1996, HCC began offering ESL and citizenship courses, which now include Somali, Oromo, Central American, Karen and Vietnamese students. Likewise, the museum, added in 2014, emphasizes multicultural education.

â€œA lot of people didn’t know who the Hmong were,â€ says HCC executive director Txongpao Lee, who came to St. Paul in 1984. â€œThey thought we were Vietnamese or Chinese.â€

And these people certainly didn’t know about things like the Secret War, which saw more than 30,000 Hmong soldiers die fighting the Communist Pathet Lao in a CIA covert operation in Vietnam, which the museum highlights. evidence. In fact, Lee once met a military commander who told him he was grateful to the Hmong people who served during the Vietnam War as a key ally of the United States.

Perhaps if these vandals had entered the museum instead of degrading it, they would have seen photos of Hmong soldiers dressed in US military fatigues, pushing tanks through the jungle mountains of Laos, and would have changed hands. notice about them.

Either way, the vandals’ plan backfired. Lee says the response from the community has been overwhelming. The HCC received donations, postcards and appeals for support from everyone, from the governor to passers-by on University Avenue bringing flowers.

â€œMyself, Mark and the rest of the Hmong Cultural Center are not alone in this problem,â€ says Lee. “They are all standing behind us.”

And, thanks to it all, those vandalized planks finally come loose from the windows so that sunlight can flood the center again.

Names in bold give Los Angeles a new cultural hub