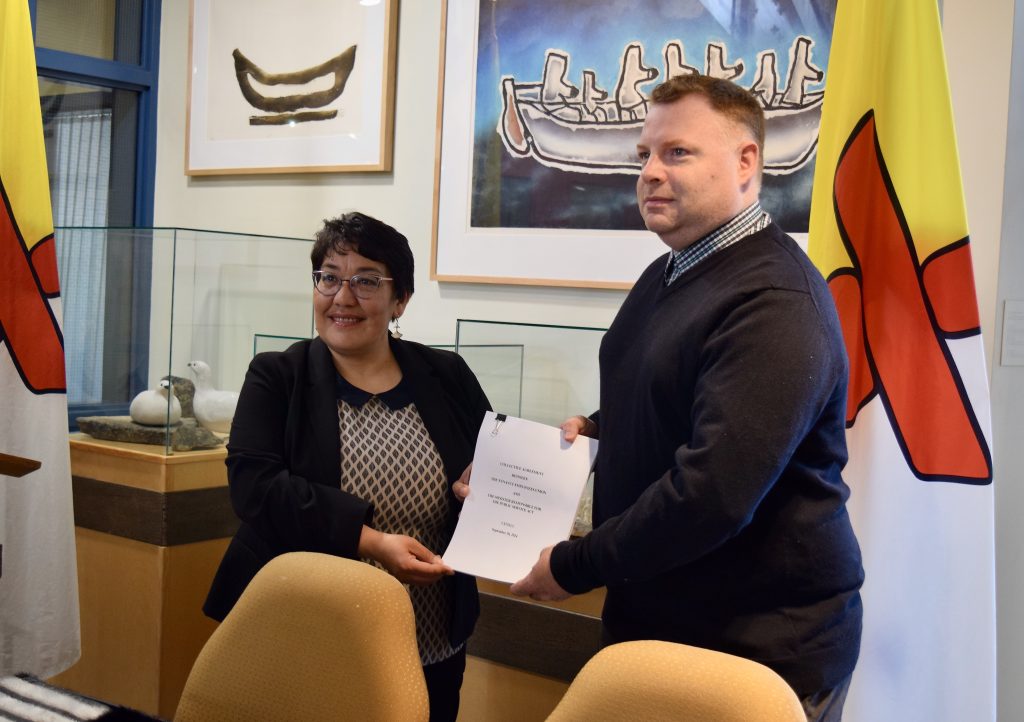 GN employees will receive $3,500 on Wednesday from the signing of a new contract

Unionized Nunavut government employees can expect a $3,500 lump sum payment in their accounts on Wednesday, the president of the Nunavut Employees Union said.

Union President Jason Rochon made the announcement Monday during the signing of the new collective agreement between the union and the GN at the Iqaluit Legislative Assembly. It took more than four years to negotiate a new contract between the GN and its 4,000 unionized workers to replace the deal that expired in 2018.

Over the six-year term of the new contract, workers will receive annual wage increases of between zero and 3.5 percent per year. At the end of the contract, salaries will be 9.31% higher than in 2018. The new contract will come into effect on October 1, 2018, the day after the expiry of the previous contract. It will see the territorial government and its workers unionized until it expires in September 2024.

Employees who worked for four years will be paid retroactively in four instalments starting this fall, likely the same day as the salary increase, Rochon said.

The $3,500 lump sum payment is paid to all employees, including those who work indeterminate, term or casual.

“We recognize that our GN members have had to wait a long time, but we have worked very hard especially in the last month to make sure everything was translated, everything was rechecked and to try to implement the new collective agreement as quickly as possible. possible. as possible,” he said.

The ratification comes as Canada is experiencing record inflation – it was set at 8.1% in June compared to the same month last year, tlargest increase since 1983, nearly 40 years ago.

“Nobody, on the management side or on the union side, has seen inflation rise as it has. So we did our best,” Rochon said.

“We think we’ve gotten the best possible deal at the moment. We’re ready to get the formula fixed when we get back to the table in less than a year and a half or so. We can’t wait to be there. .

Rochon said he didn’t know the percentage of unionized employees who voted on the deal, but said it was the highest turnout the union has ever seen.

He also did not say how many employees voted in favor of the deal.

The new collective agreement, which will expire on September 30, 2024, also includes other benefits.

Employees will see five days of paid leave and five days of unpaid domestic violence leave; two days of discretionary special leave, instead of one; two paid days per year for Inuit cultural activities; increase in annual maximum dental benefits from $1,200 to $2,000; and extended parental leave allowances, among other inclusions.