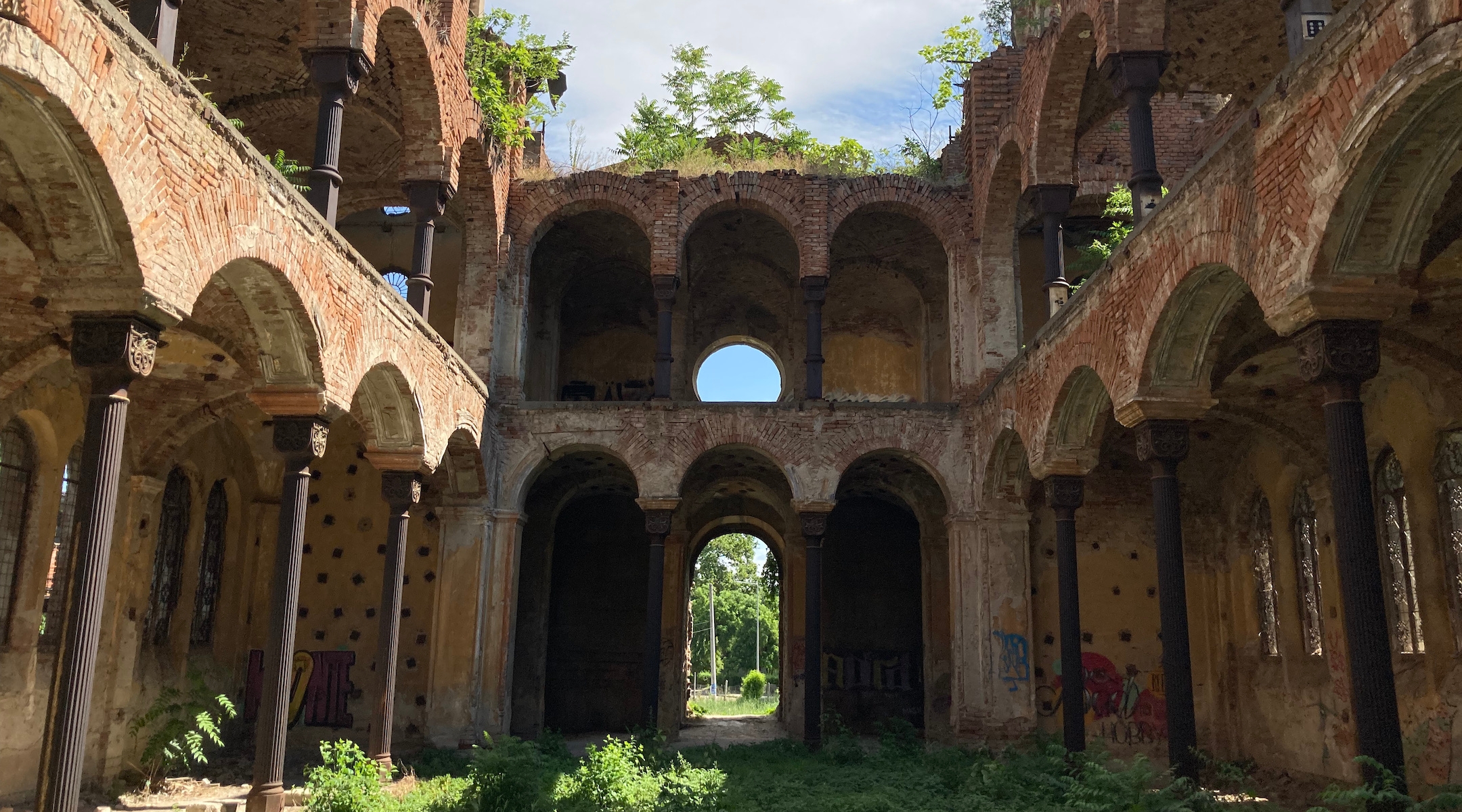 VIDIN, Bulgaria (JTA) – For 40 years, the central synagogue in this port city has resembled the city’s Jewish population – barely extant and rapidly aging.

The synagogue, which was built in the 19th century, is literally a shell of itself. Vines crawl along the stone walls, and the intricate painted patterns on the building’s columns have faded after years of exposure to the elements. One of the domes has completely disappeared, the result of a bomb from WWII. The roof over the shrine is also missing – not that the city’s Jews use it. With about ten members, the Jews of Vidin can barely form a minyan.

But over the next six months, the synagogue will undergo a massive transformation, gaining new life as a $ 6 million cultural and community center – for Jews and non-Jews alike.

The municipality of Vidin hopes that the project can do more than restore an old building. The city is nestled in a hollow of the Danube, which is part of a small part of northwestern Bulgaria that juts out into a rift between Romania and Serbia. It is also located in the poorest region of the European Union and, not surprisingly, one of the continent’s fastest declining population centers. (Bulgaria itself holds the despicable title of the fastest shrinking country in the world.)

It hasn’t always been that way.

During the construction of the synagogue in 1894, Vidin industrialized rapidly. Austrian architect Friedrich GrÃ¼nanger designed the synagogue as a majestic monument: the two-story building featured a turret at each corner, making it visible from afar. Delicate stained glass windows and intricate murals covered the interior.

GrÃ¼nanger modeled his efforts on the Great Synagogue of Vienna hoping that Vidin would one day grow as big and powerful as the Austrian capital. At that time, the Jewish community had about 1,500 people, or about 10% of the population of Vidin. By the eve of World War II, the number had grown to a quarter, or some 2,000 Jews. The Jewish community in Vidin made up around 5% of Bulgaria’s overall Jewish population. Sofia, the capital, was home to 50%.

The exterior of the Vidin synagogue features the contours of the windows in the shape of the Ten Commandments. It was designed by the famous Austrian architect Friedrich GrÃ¼nanger. (Jonas Goldman Kay)

Unlike its neighbors, Bulgaria did not expel its Jews during the Holocaust (although it did expel the Jewish population from neighboring Macedonia, which the country occupied during the war). However, after the founding of Israel in 1948, Bulgaria strongly encouraged its Jewish population to immigrate to the new Jewish state. Most of Vidin’s Jews nodded and left for Israel, leaving behind their war-torn synagogue. In 1949, there were only 17 Jewish families in Vidin, many of whom got married and assimilated into the population.

Today that number has declined further. Rosa Marinova, president of the Jewish community organization in Vidin, estimates that there are around a dozen Jews in the city, half of whom regularly attend community events.

â€œWe don’t have a synagogue anymore,â€ Marinova said. â€œWe’ll get together on Rosh Hashanah and other holidays and do something small, but it’s nothing formal. ”

A few years ago, Vidin erected a small monument in the city’s central park to commemorate its once vibrant Jewish community.

Without a rabbi and no one to use the space, the dilapidated synagogue fell into disrepair. In the 1980s, the city attempted to renovate the synagogue with the help of the Bulgarian Ministry of Culture and the National Institute of Monuments. But the fall of communism delayed this plan, leaving the synagogue without a roof.

Fully exposed to the elements and abandoned, the already decrepit synagogue fell into complete disrepair. Grass grew on the tiled floors, the iconic rusty metal columns, and the walls filled with the graffiti of local teenagers. Although the synagogue was returned to the Bulgarian Jewish Community Organization in the mid-2000s, the few remaining members were of no use to the faltering structure.

â€œWe have been hearing for years about how we should make efforts to restore this synagogue, as it is considered one of the most beautiful in Bulgaria,â€ said Maxim Delchev, director of education at Shalom. , the umbrella organization of the Jewish community in Bulgaria. “But, to be honest, we couldn’t put a ton of money into a synagogue in a city that probably won’t have a Jewish community in 20 years.”

So when the municipality of Vidin approached Shalom in 2017 with a proposal to turn the synagogue into a cultural center, the Jewish organization was worried but enthusiastic. After all, she had just reclaimed the synagogue, and the city had once proven to be a negligent steward of the property. However, the fact that the city took the initiative and had a concrete plan to restore the synagogue gave Shalom hope. The same is true of the $ 6 million in EU funding that had been earmarked for the project, which is part of a larger $ 1.6 billion project to accelerate development in Bulgaria.

Shelly Vladeva, left, and Rosa Marinova are members of the declining Jewish community in Vidin, Bulgaria, which today numbers less than a dozen. (Jonas Goldman Kay)

For many in Vidin, the effort to rebuild the local synagogue is their last chance to create a tourist destination that will revive the cash-strapped region.

â€œAlthough it is no longer used for religious practice, it will experience new life as a cultural space,â€ said Yordan Tsenov, the architect of the project.

Across Europe, small towns and cities have turned dilapidated synagogues into cultural spaces, museums and even restaurants, through adaptive reuse. These spaces are generally not designed to be exclusively Jewish. While the Municipality of Vidin shows a genuine interest in preserving Vidin’s Jewish history, it also sees a unique opportunity to bring foreigners – Jews and non-Jews alike – to the city.

Over the next few years, the plan slowly took shape. Named after a Jewish artist from Vidin, the Jules Pascin Cultural Center will house a museum, performance space, library and cafÃ©. It is also planned to install a permanent exhibition here devoted to the history of the Jewish community.

Tsenov said that although the synagogue is no longer a functional synagogue, the city plans to restore most of the original architectural features. Most of the early work will consist of stabilizing the initial structure, including laying a new foundation and filling the hollow metal columns with concrete.

At the end of June, Vidin organized a revolutionary event in the presence of the mayor and several Jews from the community. Construction has started last month, and the center is expected to open by the end of 2022, unless there is a delay.

â€œIt is a magnificent building and an important part of the history of our city,â€ said Shelley Vladeva, another member of the Jewish community. â€œEveryone in Vidin – Jews and non-Jews alike – wants to see it restored. “

Even after its opening, the Jewish community does not intend to use the synagogue for services. Members will continue to have Shabbat dinners, Rosh Hashanah services and Passover seders in their new community space, a small room near the city’s monument to its Jewish community. It’s much more humble than the synagogue, but it fits their community much better.

Plus, Vladeva adds with a smile, this one is next to the park.