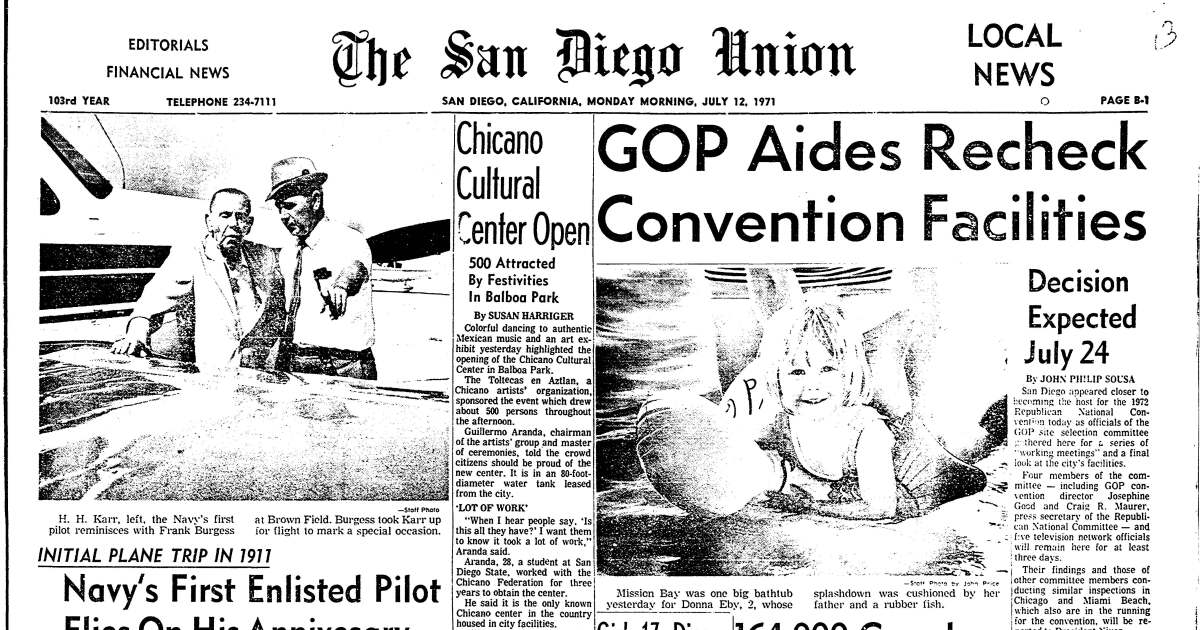 Archives: the Chicano cultural center opens in 1971 in Balboa Park

500 drawn to the festivities at Balboa Park

Colorful dances to authentic Mexican music and an art exhibit yesterday marked the opening of the Chicano Cultural Center in Balboa Park.

The Toltecas en Aztlan, an organization of Chicano artists, sponsored the event which drew around 500 people throughout the afternoon.

Guillermo Aranda, president of the artist group and master of ceremonies, told the crowd that citizens should be proud of the new center. It sits in an 80 foot diameter water tank leased from the city.

â€œWhen I hear people say, ‘Is that all they have?’ I want them to know it took a lot of work, â€said Aranda.

Aranda, 28, a student at San Diego state, worked with the Chicano Federation for three years to get the center.

We have said that this is the only known Chicano center in the country with facilities in the city.

â€œIt’s not something just for fun,â€ Aranda said. “It’s for awareness.”

However, participants and spectators seemed to enjoy the dances and songs outside the building and over 50 paintings and drawings inside. Mexican food was served.

The program consisted of the type of cultural activities planned at the center, formerly known as Centro Cultural de la Raza. they included the reading of poetry, the Ballet Folklorico en Aztlan and a Mexican combo with drums, guitars and castanets.

They sang Ya Llegaron las Toltecas (The Toltecs Came) and were dressed in dresses with sequins and bright red, yellow and blue beads that Ms. Moreno sewed. The Toltecs are members of the Nahuatlan people of central and southern Mexico.

Ms. Moreno will be a volunteer music and beading teacher this summer. His daughters will assist him.

â€œThe center has a very bright future,â€ Ms. Moreno said. This is because a lot of Mexican-American artists are helping you.

Ms Moreno said she would also work with musicians in Tijuana and San Diego to secure more musical instruments for the center.

The center operates on a reduced budget and its 12 staff members are mostly volunteers.

Aranda and another manager will be paid $ 800 per month by the San Diego Parks and Recreation Department during the summer.

When the water reservoir was transformed into a center earlier this year, the city spent $ 19,880 and continues to pay water and electricity bills.

The group donates $ 1 per year to the city and receives limited funds from the United Community Services and Economic Opportunities Commission.

Arnanda said the Toltecas in Aztlan expect more funds from the city, county and state.

Within a year, activities such as music, dance, arts and crafts, graphics, sculpture and cooking workshops will be fully operational, Aranda said. A daycare was also offered.

â€œIn five years, we plan to have our own building,â€ said Aranda.

The chariot, although apparently spartan, was brightened up by paintings.

The mural, like many of the centre’s artwork, signifies “La Raza” or the Chicano movement, he said.

His oil painting featured a man with a machete and two eagles devouring a rattlesnake, a symbol of the Mexican Inca and Aztec culture of Peru.

The paintings are donated by Mexican-American artists of all ages and are not for sale.

Aranda said the center will eventually sell paintings and handicrafts.

The artists also plan to paint the interior of the float with murals of Mexican culture in San Diego.