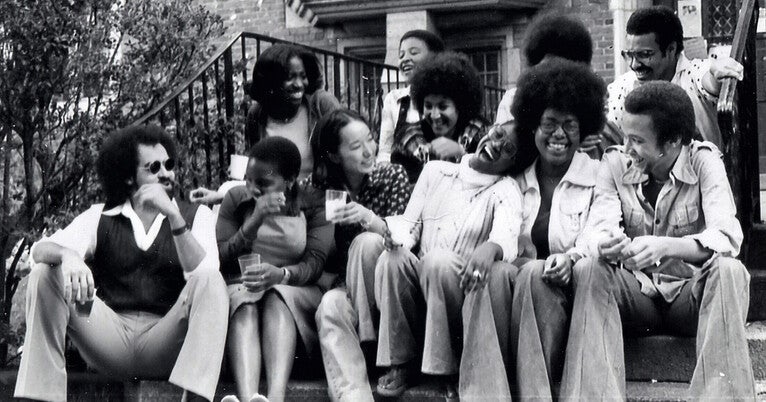 One of Timeica Bethel’s most uplifting memories from her time at Yale was in the space on campus that she felt was most like her “home”: the African American Cultural Center.

It was election day in 2008, and Bethel, Yale College Class of 2011, had joined others at the center to encourage members of the local community to vote and arrange transportation to polling places for those who needed it. Later, at an election “watch party” in standing rooms, she watched the results roll in on TV, fervently hoping America would elect its first black president. When Barack Obama was declared the winner, the room “erupted” in shouts and cheers, recalled Bethel, who had voted for the president for the first time. Then, as part of a large crowd, Bethel walked from the African American Cultural Center to the old campus, where everyone gathered in a circle to sing the anthem “Life Every Voice and Sing.”

“We felt like we had done something and our voices had been heard,” Bethel said of the experience during a virtual interview broadcast live and hosted by the Yale Alumni Association (YAA) end of March to mark the 50th anniversary celebration of the African American Cultural Center.

Next weekend, April 29-May 1, Bethel will be back on campus as the center celebrates its 50th anniversary with its first in-person events, centered around the theme “Renaissance and Revolution: Celebrating 50 Years of ‘African American Cultural Center Legacy at Yale and Beyond.’ The center celebrated its official founding anniversary throughout the 2019-2020 academic year, but had to postpone in-person gatherings due of COVID-19.

For Bethel and the other organizers of next weekend’s celebration, there is great excitement at finally being able to join generations of Yale alumni and current students whose time at Yale has been inextricably linked to the African-American Cultural Center, affectionately known as “the House.”

The center – the first black cultural center in the Ivy League – was established in the fall of 1969, after a period of racial and civil unrest at Yale, in the New Haven community and across America. In 1967, students formed the Black Student Alliance at Yale (BSAY), which lobbied for increased enrollment of black students in college, the development of a major in African American studies, improved relations with the city of New Haven and an African-American association. Cultural Center. In 1970, the center played a central role during the infamous May Day Rally and Demonstration on the New Haven Green during the Black Panther Bobby Seale murder trial hosting members of the Black Panthers.

The Yale African American Cultural Center was first located at 1195 Chapel St., then moved in 1970 to its current home at 211 Park St., which has since served as a venue for cultural, social and political activities for black students on campus. The center is home to nearly 40 undergraduate and graduate student groups and organizations, including the Black Church at Yale, the a cappella group Shades, the Yale Gospel Choir, the Yale Black Law Students Association, and the dance group Steppin’ out.

Bethel is one of the co-chairs of the 50th Anniversary Planning Committee, along with fellow alumni Don Roman ’71 and Sheryl Carter Negash ’82, under the supervision of Risë Nelson, who served as director of the African American Cultural Center from 2010 until to last month, when she took on a new role as Director of Diversity, Equity and Inclusion for Yale University Library. In the aforementioned Yale Alumni Live interview, Nelson and the three co-chairs said the three-day “Renaissance and Revolution” celebration will recognize the historical and current importance of the role of the cultural center and the intellectual, professional, artistic, Politics. , and the cultural contributions made by its members to Yale and society at large.

In addition to social gatherings, weekend events will include the following:

• “Celebration of the Arts” (Friday, April 29, 7-9 p.m.), a panel discussion featuring alumni who will share insights into their work in the arts and reflect on the role of the arts in transforming the world. A showcase featuring student performance groups affiliated with the center and other campus cultural centers will follow. Speakers include attorney and entertainment and media consultant Gregory A. Thomson ’85, ’89 LAW; playwright and Yale School of Drama faculty member Tarrell Alvin McCraney ’07 MFA; director and writer Mariama Diallo ’10; and painter and MacArthur Foundation Fellow Jordan Casteel ’14 MFA

• “What’s going on in the world?” (Saturday, April 30, 10 a.m.), a discussion of how black alumni are banding together to support and promote diversity, equity, and inclusion at Yale and other U.S. universities across the country by the through the Coalition Against Racism in Education Inc. (CARE) Speakers include Cara McClellan ’10, ’15 LAW, an attorney at the NAACP Legal Defense Fund and members of CARE

• “The house through the ages: an intergenerational conversation” (Saturday, 1:45 pm), a reflection by former students on the heritage of the center and an exploration of its future. Speakers include Ron Howell ’70, Stuart Taylor ’82, Ruth Botsio ’09, Timeica Bethel ’11 and Catherine Labiran ’19 MA Pamela George, former director of the African American Cultural Center, will host.

• Brittain Lecture (Saturday, 3 p.m.), a panel including Yale faculty members in African American Studies and Yale graduates who have majored in the field will discuss the importance of teaching and study of Black history, how students have applied their degrees beyond Yale, and what Black alumni can do to support the Yale department and the expansion of Black Studies in general. Guest speakers are Yale faculty members Crystal Feimster, Carolyn Roberts, Aimee Cox and Jacqueline Goldsby, and alumnus Ralph Dawson ’71. Yale faculty member Phillip Atiba Goff will moderate.

• Bouchet Ball & Awards Ceremony (Saturday, 7 p.m.), a formal gala that will bring together Yale students and alumni from all decades for a celebration of 50 years of Black leadership, achievement and community. Speakers are Sheila Jackson Lee ’72, Yale faculty member James Forman Jr. ’92 LAW, and Obi Ndefo ’94, ’97 MFA Awards will be presented to nearly a dozen alumni and faculty members Yale Professor for their notable contributions to the black community at Yale and beyond.

• Special Remembrance and Thanksgiving (Sunday, 10:00 am), which will honor alumni, faculty, administrators, community members and students who have died throughout the center’s history. This is a virtual session; members of the African American Cultural Center community provided slides of those they wish to honor.

• “We Came This Far by Faith” (Sunday, 11:00 am), a Yale Black Church service led by invited former clergy from all faiths, followed by brunch. Guest speakers include Bishop Frank Reid ’74 and Black Church at Yale Pastor Orlando Yarborough ’06 M.Phil. ’06, ’10 Ph.D.

There will also be virtual events for alumni who cannot attend the celebration in person, including the Yale Alumni Live interview featuring the co-chairs of the celebration planning committee. In this interview, recorded last month, Risë Nelson noted that the in-person celebration comes after a period of great challenge due to the pandemic and nationwide protests in response to the murders of Breonna Taylor and George Floyd, among other black citizens. . Meanwhile, the African American Cultural Center was temporarily closed as the campus resorted to remote teaching, learning, and gathering.

“It’s amazing what we’ve been able to do together in the face of so many challenges,” Nelson said in the interview. “I’m excited to see how the students are picking up the torch and carrying on.”

In that same interview, Don Roman said one of his favorite memories of Yale was the May Day protests during Bobby Seale’s trial in 1970. The center, Roman said, was a “safe house” where students blacks could retreat amid the “uncertainty and fear of what was to come during this tumultuous two-week period.”

Given the role the center has played in the lives of generations of Yale students, it’s of utmost importance that it continues to be that safe space for black students, Sheryl Carter Negash said in the interview.

“We want to make sure this is a sustainable organization at Yale,” said the Yale alumnus, who served on the YAA Board of Governors and was an active participant in Yale’s annual Day of Service, among other alumni commitments.

To this day, she says, the center remains “one of my happiest places in the world”.

Most events have been sold out. Registrations are currently open for the “The Arts Festival” event to be held at Woolsey Hall on April 29 at 7 p.m. All are invited to join online for the live streamed events and pre-recorded sessions that will be posted on the AFAM50 events page from April 29. Only those with confirmed registration will be admitted to in-person events.

Yom HaShoah commemoration is April 27 at the Jewish Cultural Center